Can Bruno Fernandes save Man Utd’s season as he closes in on January transfer? Big debate 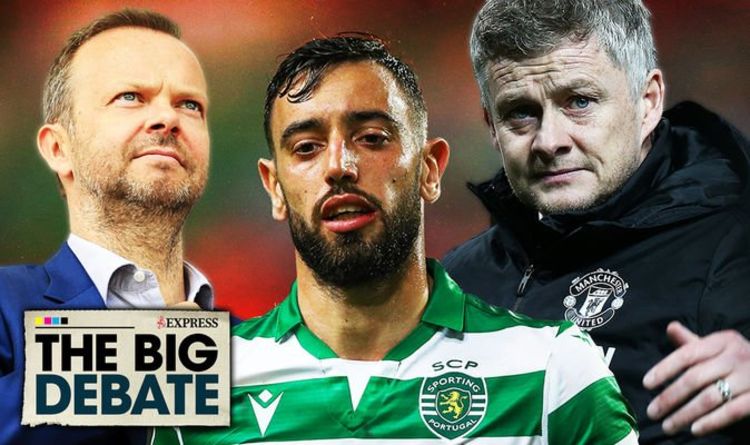 United’s move for Fernandes has gathered pace today with reports claiming he has agreed terms and with the club’s chief negotiator Matt Judge arriving at the Carrington HQ earlier today.

Fernandes is still in line to play for Sporting on Friday night against Benfica in the Lisbon derby and is likely to be confirmed as a United player early next week.

United desperately need some more creativity in the middle of the park after a horror first half of the season which sees them fifth, five points off fourth and a staggering 27 points behind leaders Liverpool.

And Fernandes is the man Ole Gunnar Solskjaer is ready to go for after failing with moves for James Maddison and Donny van de Beek.

Fernandes has a great goal record – 13 in 20 games across the Europa League and the Portuguese league – and will add some dynamism to United. But our writers debate whether or not he is in fact the answer for United.

Manchester United’s short and long-term needs mean Bruno Fernandes is just the ticket as they look to add some much-needed attacking impetus to their midfield.

The Portuguese has weighed in with plenty of goals and assists over the past couple of years at Sporting Lisbon and, at 25, is the perfect age to hit the ground running when he rocks up at Old Trafford.

Fernandes can quickly become an integral part of Ole Gunnar Solskjaer’s team and is at the right stage of his career to be a prominent figure as the United boss attempts to realise his vision of creating an entertaining, successful side.

Paul Pogba, for all of his quality, has failed to set the world alight since returning to United and, if this move goes well, Fernandes could close the exit door behind the Frenchman.

Harry Maguire seems to be a shoo-in to replace Ashley Young as club captain but, having skippered Sporting, Fernandes will offer some much-needed on-field leadership too.

Bruno Fernandes might not be the answer to all of Ole Gunnar Solskjaer’s problems – but he could be the perfect man to rejuvenate their underwhelming midfield.

Manchester United are in dire need of a credible goal threat in the middle of the park, which would naturally allow Marcus Rashford and Anthony Martial more freedom.

With 48 goals and 31 assists in his last 78 games, it looks unlikely that Fernandes will flop, despite United’s recent history with players.

With Solskjaer’s side only five points away from the top four, the addition of Fernandes and a run without injuries might be enough to bridge that gap over the next few months.

The excellent goalscoring record of Bruno Fernandes in the past couple of seasons for Sporting Lisbon suggests he could be a welcome addition to the team at Manchester United.

A rate of better than one goal in every two matches as an attacking midfielder is the kind of statistic enjoyed by Frank Lampard as a player at Chelsea.

Fernandes is a skilful footballer, easy on the eye, but the criticism of him in Portugal is about his inconsistency of performance; sparkling one match and relatively anonymous the next. That sounds like Manchester United right now, rather than how they want to be.

Is he the answer? In one sense he is, because United definitely need a talented new player to perk up their squad, and to generate optimism. Fernandes will surely do that.

Whether Fernandes is the player to transform the team from also-rans to genuine top-four material is open to considerable doubt.

He is one part of the jigsaw for United, not the final piece.