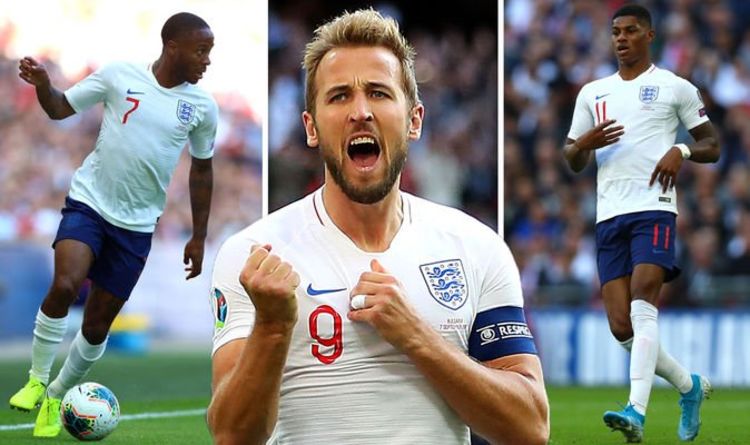 Gareth Southgate believes England have the best strike force in the world – only the players themselves don’t believe it.

Although it does mean Marcus Rashford will just have to accept that, in Southgate’s eyes at least, he is not a no. 9.

Kane’s second England hat-trick and a goal from Raheem Sterling in a 4-0 win against Bulgaria lifted England back to the top of Group A above Kosovo ahead of their meeting at St Mary’s Stadium.

And with 14 goals from just three European Championships qualifiers so far, Southgate would not swap the attacking options he has at his disposal with anybody else in the world.

“They’re as exciting as anything really,” he said. “I remember going to Spain and thinking, when we look at our front three and look at their front three, I felt that we were strong.

“It’s easy to find what the team can’t do well, but sometimes you can overlook the brilliant things that they do, that maybe other countries don’t have.

“Do they realise they are potentially the world’s best strike force? Possibly they don’t, because they don’t view themselves sometimes as others do.”

Kane and Sterling, he adds, have shown they are “proven” articles, while Rashford is still a “work in progress” – with Jadon Sancho and Callum Hudson-Odoi snapping at his heels.

Even though Ole Gunnar Solskjaer has given him the main striking duties at Manchester United since the departure of Romelu Lukaku, Southgate is concerned that Rashford may not be a natural central striker.

“Although we’ve, for a long time, almost wanted Marcus to be that option as a nine, I’m still not certain that that is where he is happiest and where he does his best work,” the England manager said.

“A lot of his development at United was as a ‘wide raider’, and he isn’t as strong as Harry with his back to goal and holding play up.

“A lot of his best work is in that inside left channel, coming in off the line. He can threaten teams in behind more. When he opens his legs and runs in behind defences, that’s the last place they want to be.