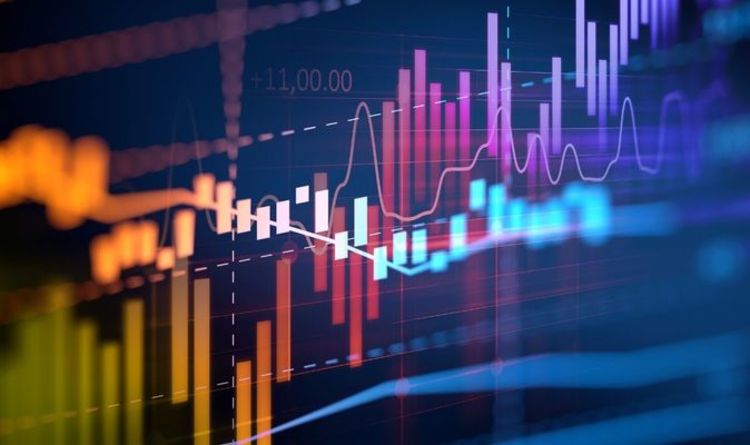 On Monday preliminary results from a new vaccine produced by Pfizer and BioNTech found it can prevent 90 percent of people from catching COVID-19. The companies are seeking emergency approval to begin administering the vaccination at the end of the month.

“Big tech, which has benefited from our virus-driven change in behaviour, is now falling out of favour while small-cap stocks and those that have been most affected by social distancing restrictions have outperformed.”

In the US the blue-chip Dow Jones, with a strong representation of industrial shares, is up this week by nearly 4 percent.

However the more tech-dominated Nasdaq has lost almost the same amount.

On Monday nearly $2trillion (£1.5trillion) changed hands in one of the busiest days of trading since the coronavirus pandemic struck.

Michael Hewson, chief market analyst at CMC Markets, wrote in a note: ”This week’s news on a vaccine, while welcome, does not change the fact that France, Germany and the UK are still in the middle of partial economic lockdowns.

“However, for now markets appear content to ignore this and are focusing on the potential green pastures of a post-pandemic world, with a workable vaccine.”

The tech index climbed 1.6%, the most among major S&P sectors, followed by the consumer discretionary index .

2pm update: US stock indexes set to jump amid economic hopes of a vaccine

Technology stocks have also expected to see a bounce back from steep losses this week.

Nasdaq 100 futures were up more than 1%, while technology mega-caps including Netflix Inc, Amazon.com Inc and Facebook Inc, the so-called stay-at-home winners, also gained about 1% in premarket trading.

Randy Frederick, vice president of trading and derivatives for Charles Schwab in Austin, Texas said: ”It will be a long time before we can get a sizeable part of the population inoculated with the vaccine… but it does speak to a slightly brighter future.”

The U.S. dollar rose on Wednesday as optimism about a potential coronavirus vaccine was offset by worries about how the drug will be delivered and by a surge of new infections in the United States.

The New Zealand dollar soared to its strongest in a year and a half as traders scaled back bets that the central bank would move to negative interest rates.

Other riskier currencies, like the Norwegian crown and the Australian dollar, also fell against the safe-haven greenback.

“People are taking a little more prescripted approach to the vaccine. The news is undoubtedly positive, but of course, we need to delve into the detail and think about the ramifications of the whole process,” said Jeremy Stretch, head of G10 FX strategy at CIBC Capital Markets.

International travel remains at very low levels and a surge of coronavirus cases in the last two months has prompted further restrictions, dealing Virgin a new blow just after it stabilised its financial position in September.

A new lockdown in England and accompanying travel ban added to Virgin’s difficulties in its main UK to North America market, where a U.S. bar on most arrivals from the UK and Europe is still in place.

CEO Shai Weiss said Virgin would survive and that its downside case was for normalised UK to U.S. travel to resume next spring.

“The recapitalisation, with the support of our shareholders and new investors and everything that I’ve mentioned, should see us through, even under more strenuous positions,” he told an online conference.

8.00am update: Wetherspoon boss lashes out at lockdown rules

JD Wetherspoon boss Tim Martin has lashed out at “baffling and confusing” coronavirus restrictions as the pub chain revealed that England’s second national lockdown will cost it around £14 million.

Mr Martin’s latest attack on government measures came as Wetherspoon reported a 27.6% plunge in first-quarter sales for the 15 weeks to November 8 following the introduction of the 10pm curfew.

It added it will burn through around £14 million while its pubs are forced to close in the second lockdown.

Mr Martin, who is chairman of Wetherspoon, said: “For any pub or restaurant company trading in different parts of the UK, and for customers generally, the constantly changing national and local regulations, combined with geographical areas moving from one tier to another in the different jurisdictions, are baffling and confusing.”