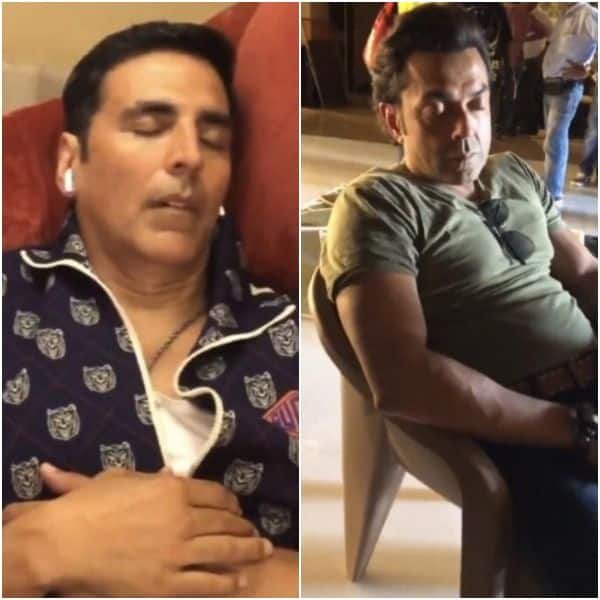 Housefull 4 really seems like a fun ride we can’t wait to hop on! Starting from the trailer to the songs, the Akshay Kumar film has really been at the helm of headlines and mania thanks to all the BTS action fans have chanced upon. But just when we thought it couldn’t get any better, it did and how! It turns out that Riteish Deshmukh who also plays a pivotal part in the film had recorded a priceless video during the shooting of the Farhad Samji’s directorial which has Akshay Kumar and co-star Bobby Deol doing things one wouldn’t imagine!

Now, before your mind runs in directions it shouldn’t, Riteish caught Akshay and Bobby napping on the sets and it is hilarious. While Akki can be seen laying still while listening to songs on his phone, Bobby can be seen dozing while fanning himself. Riteish even wrote, “My Hardworking Co Stars of #Housefull4 @akshaykumar @thedeol…..Ayeeeeeee!!!! @kritisanon @hegdepooja @kriti_official BG score by @ChunkyThePanday” Check it out here!

Talking about Sajid Nadiadwala’s Housefull 4 which is scheduled to release this Diwali. The fourth instalment of Housefull 4 has an ensemble cast which includes- Kriti Sanon, Kriti Kharbanda, Bobby Deol, Rana Daggubati, Riteish Deshmukh, Chunky Panday, Saurabh Shukla, Johnny Lever, Jamie Lever, Pooja Hegde among others. The film is due for Diwali release but it is still in the post-production stage. “It’s a scaled-up film, the biggest in the franchise in terms of budget. The chunk from the Baahubali era that required visual effects was shot much in advance. A team is working on the final edit and VFX,” a source was quoted saying.

At the trailer launch, Akshay had even joked and added, “I am going to lose all the respect I have earned with serious cinema with Housefull 4. Every time I want a break, I do a Housefull film. It is a fun film; I have fun on the sets. Having said that, making people laugh with slapstick is the toughest of jobs.” Stay tuned to BL for more such updates and scoops!