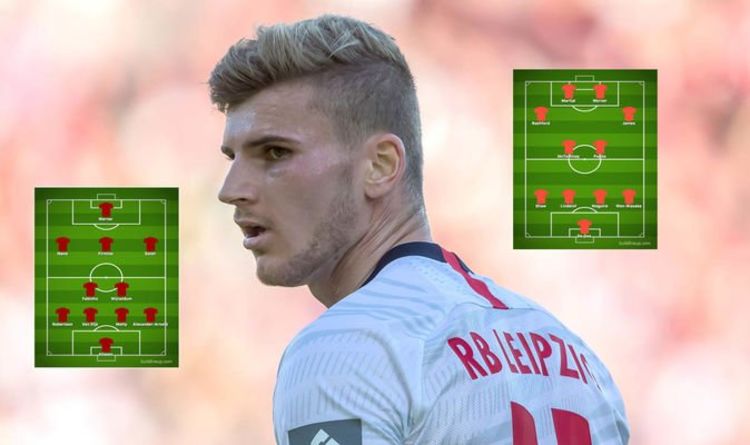 Liverpool and Manchester United both want to sign RB Leipzig star Timo Werner, according to reports.

The Mirror claim that both teams want to bring the Germany international to the Premier League, having been impressed by his terrific form in the Bundesliga. The striker scored a hat-trick on Saturday in a stirring 8-0 victory over Mainz.

Liverpool would rather wait until the end of the season to sign Werner but Manchester United are ready to make their move in January in an attempt to hijack a transfer.

Express Sport now looks at how Werner could fit in at both teams.

Werner would no doubt find it tough to break into Liverpool’s side, despite his fine form for Leipzig.

But some tactical tinkering could allow the Germany international to play alongside Roberto Firmino, Mohamed Salah and Sadio Mane.

Liverpool remain keen to sign a No 10, having failed to replace Philippe Coutinho since his move to Barcelona in January 2018.

Firmino could drop into that role having excelled there for Hoffenheim during his time in Germany.

And that would allow Werner to play down the middle.

Manchester United have seen Anthony Martial flourish in the centre-forward role of late.

But they’d still like to bring Werner to the club – which may see the France international drop out of the side.

However, it’s far more likely that Solskjaer would tinker with his system to allow him to play alongside Martial.

He’d also like to play Daniel James and Marcus Rashford, meaning a return to 4-4-2 may happen.

That would allow United to go through the flanks to attack with their options in the middle currently not up to scratch.

RB Leipzig were surprised at the lack of interest in Werner over the summer, according to journalist Raphael Honigstein.

“I think he would be the ideal supplement to the front three.

“He would fit their easily and I think that is why people in Germany were surprised they never pushed for him this summer.”