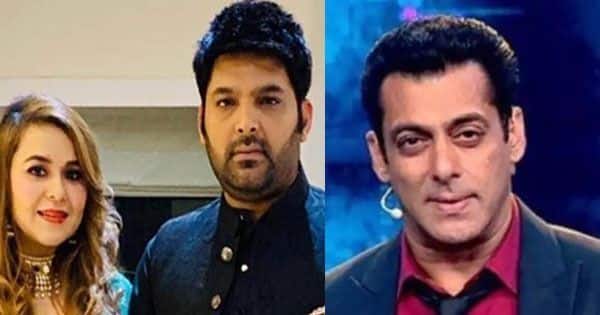 The week has come to end and it’s time to look back at the week which had some interesting stories. There have been so many stories from the television industry and if you guys have missed out on something, sit back and read on our story. Kapil Sharma’s big news, Bigg Boss 14’s drama, Asim Riaz’s viral picture, we bring you our list of TV newsmakers this week. Check out the stories which made the week interesting. Also Read – Bigg Boss 14, Weekend Ka Vaar, Preview: Salman Khan pulls Abhinav up; Ekta Kapoor to give away the immunity stone

Kapil Sharma has been in the news recently. Kapil Sharma and Ginni Chatrath are apparently expecting their second child together. As per reports in ETimes, the couple is set to welcome a member in the house. The sources close to the comedian informed ETimes that Ginni is pregnant with their second baby and it is due in the month of January 2021. Ginni is currently in her third trimester. This news has been doing rounds on the internet after Kapil Sharma’s friend and ace comedian Bharti Singh had gone live on Instagram as they celebrated Karwa Chauth together. At the end of the live video, we saw a glimpse of Ginni with a baby bump. Even during Diwali, Ginni tried to hide her baby bump in pictures. Kapil Sharma recently revealed that he has lost 11 kilos within a span of few weeks and how. In a behind-the-scenes video of The Kapil Sharma Show shared by Archana Puran Singh, Kapil was seen interacting with Govinda who had come as a guest last week. While speaking about the drastic weight loss, Kapil revealed that he reduced his weight under doctor’s advise since he had suffered from a slip disc. Also Read – Bigg Boss 14: Fans laud Jasmin Bhasin for not holding grudges against Rahul Vaidya unlike Rubina and Abhinav

Bigg Boss 14 has been in the news recently. We saw so many shades of the contestants this week. The captaincy task that happened this week has been the talk of the town. The show also landed in trouble after Eijaz Khan and Pavitra Punia’s kissing episode. The Shree Rajput Karni Sena has sent a notice to Endemol Shine India for promoting Love Jihad via its promos and videos. They are referring to the kissing promo of Eijaz Khan and Pavitra Punia that went viral. They feel it is vulgar and increases cases of Love Jihad in the nation. Their letter was shared on the handle @BiggBoss_Tak. It reads that the show is against the cultural ethos of the country and highly objectionable intimate scenes are a part of it. We also heard that Salman Khan’s personal driver and a couple of staff members had tested positive for coronavirus. This meant that he would not be able to shoot for Weekend Ka Vaar. Later, the superstar and his family’s reports came out negative and it was reported that he would be back for the weekend ka vaar shoot. Also Read – Bigg Boss 14, Day 43, Live Updates: Rahul Vaidya declares Kavita Kaushik as the new captain

Asim Riaz shared videos and pictures on his social media recently, in which he could be seen chilling with DJ Snake. The actor has been using a hashtag #topsecret in his caption which made fans believe that Asim may collaborate with DJ Snake. In the post, we can see Asim and Dj Snake chilling in Dubai. The videos he shared on Instagram stories see them cruising through the streets of Dubai in a car.

Bigg Boss 12‘s contestant Karanvir Bohra will soon be flying to Canada to join his wife, Teejay Sidhu where they will bring in their third baby. Talking to SpotBoye, the actor said, “My wife has left for Vancouver where her parents live. That’s where we are going to have our third baby. Our twin daughters Vienna and Bella were also born in Vancouver at my parents-in-law’s place.” He added, “My wife and I thought about having this child in India. But since our twin girls were so beautifully born without any problems in Vancouver, and since our daughters insisted that they would like their sibling to be born at their Nana and Nani’s residence we decided to have the baby in Canada.”

Krushna Abhishek didn’t appear on The Kapil Sharma Show last week and the reason behind his absence was his fallout with Govinda who came as a guest. We have often seen Krushna using mama-bhanja joke in his gigs to tickle the funny bone of the audience. But when it comes to facing his Chichi mama, Krushna maintains a distance. And the comedian has once again opened up about his strained relations with Govinda saying that despite the immense amount of love, the rift between them has widened a lot. In an interview with Spotboye, Krushna Abhishek said, “I love Govinda Maama a lot. And I know he loves me as much. Which is why he has the right to be upset with me. And I love him too much to face him now when things are the way they are between us. I wouldn’t able to stop my tears. So, it’s best not to do the episode. I’ve been very close to him. I’ve stayed at his home with him and his family. Jitna pyaar hai, utni hi doori ho gayi hai.”