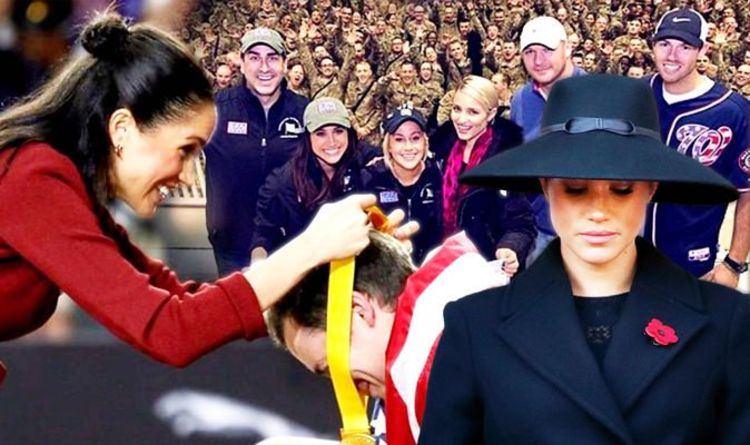 To commemorate Remembrance Day Meghan Markle has shared a post on her Instagram account SussexRoyal to “honour those who have bravely served in the Armed Forces”. The post was accompanied with an image of the Duchess with troops from 2014 when she participated in a United Service Organisations (USO) tour with the Chairman of The Joint Chiefs of Staff. She visited servicemen in five countries, including Spain, Italy, Turkey, Afghanistan and the UK.

During the tour, which she made prior to dating Prince Harry, Meghan met with service personnel and their families and she was proud to recognise their service to the country.

At the time, The Duchess said: “I have always had such a profound respect for our nation’s troops and military families.

“I cannot thank them enough for everything they do for us.”

The Instagram post read: “Today is Remembrance Day and also Veterans Day in the United States, a day to honour those who have bravely served in the Armed Forces.

“Thank you to all, for your service, sacrifice and commitment. It has been an important week to recognise those who serve (and have served) as well as to acknowledge their families.

“In 2014, The (now) Duchess of Sussex proudly went on TheUSO tour with the Chairman of The Joint Chiefs of Staff, visiting troops in five countries: Spain, Italy, Turkey, Afghanistan and the United Kingdom.

“During this tour, The Duchess met with service personnel and their families and she was proud to recognise their service to the country.”

Fans rushed to thank Meghan for her continued support of the armed forces.

Meghan stood on a different balcony with the Countess of Wessex.

Cutting a sombre figure, she looked on as Prince Harry and Prince William laid floral tributes and performed a salute in front of the monument.

It was one of the first royal engagements attended by the brothers since the Duke of Sussex addressed rumours of a rift in an ITV documentary shot in Africa.

Harry admitted to host Tom Bradby that the once-close pair have had their “bad days”.