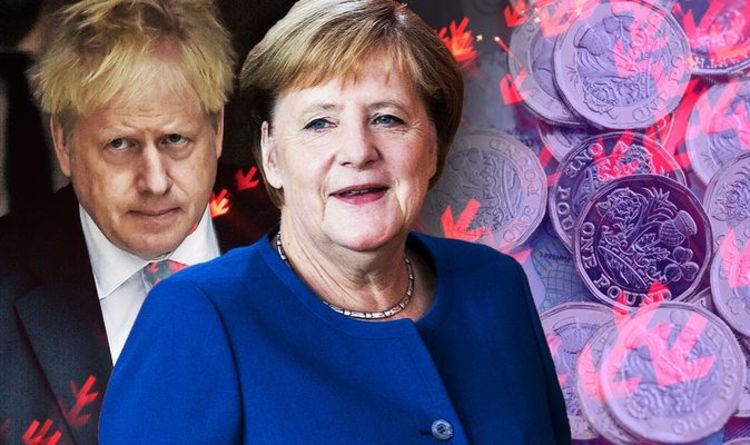 The pound sterling fell 0.5 percent to a one-week low of $1.2226 and weakened more than 0.7 percent against the euro, touching a low of 89.93 pence – its weakest level since September 9. The slump comes after Prime minister Boris Johnson spoke to Angela Merkel on the phone on Tuesday morning and the German Chancellor made clear that a Brexit deal was “overwhelmingly unlikely”.

A Government source said that the call was a “clarifying moment” and that if it represents “a new established position, then it means a deal is essentially impossible not just now but ever”.

Michael Hewson, chief market strategist at CMC Markets, said: “The pound has taken a lurch lower as reports say there is no prospect of a deal.

“It’s reacting to the newsflow which is negative. But at some point it has to react to the reality which is that there will be an extension and elections.”

With 23 days before the UK due to leave the bloc, there is no sign the impasse between London and Brussels could be bridged and both sides are jostling to avoid blame for a delay or a disorderly no deal Brexit.

Mr Johnson last week sent a proposal to Brussels to replace the Irish border “backstop” – an insurance policy to keep the border open between the Republic of Ireland and the province of Northern Ireland – which has been rebuffed by EU leaders.

Downing Street sources claimed Mrs Merkel had made clear that an agreement was now “overwhelmingly unlikely”.

Following a telephone call with Mr Johnson, she was said to have insisted the Irish must have a veto over Northern Ireland leaving the customs union.

A Number 10 source said Mrs Merkel had told the Prime Minister that the UK could not leave the EU without leaving Northern Ireland behind in a customs union with the EU.

The source told Sky News: “It was a very useful clarifying moment in all sorts of ways.

“If this represents a new established position, then it means a deal is essentially impossible, not just now but ever.

“It also made clear that they are willing to torpedo the Good Friday Agreement.”

The claims provoked a furious response from Mr Tusk who accused him of jeopardising the future security of the EU and the UK.

He tweeted: “Boris Johnson, what’s at stake is not winning some stupid blame game.

“At stake is the future of Europe and the UK as well as the security and interests of our people.