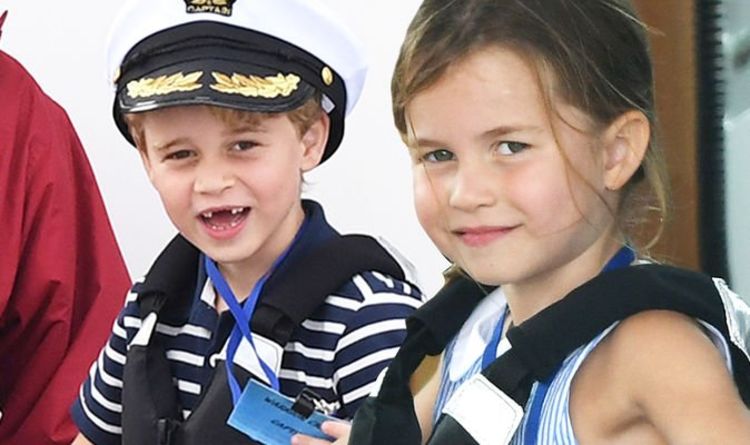 Kate, 37, slipped out of her stylish nautical-inspired navy trousers and peplum top and into her sailing gear as she and two of her three children popped on life jackets with their father and some of the Middleton clan. Michael Middleton was spotted in a red coat and sunglasses watching over little George, while Charlotte was photographed inside the ship. The couple took part in a race over the Isle of Wight for charity.

Kate and William joined in the fun today to support eight charitable causes.

The winning team in the regatta will win The King’s Cup.

the mother-of-three, who also has little Prince Louis, 15 months, swapped her earlier outfit for shorts and a white polo top and tied her long dark hair back.

Huge crowds watched from the grandstands and cheered on the Cambridges.

The boats were recalled to the starting line after an initial false start in which some of them were over the line.

Heavy rain has been forecast for much of the country on Friday, with strong winds also expected, especially in the south, which could have proved a problem for the sailors taking part in the event.

The yachts represent causes supported by William and Kate and are racing in the waters around Cowes.

Kate has chosen four of her patronages and is competing on behalf of the Royal Foundation, in connection with her work on the early years development of children.

Bishop is competing for Action on Addiction, BBC presenter Katie Thistleton is supporting Place2Be, and Olympic champion rower Helen Glover is taking part for the Anna Freud National Centre for Children and Families.

The winning team will be awarded the trophy first presented by King George V at Cowes’ Royal Yacht Squadron in 1920.

William and Kate hope the King’s Cup regatta will become an annual event, increasing awareness of the benefits of sport, while also raising support and funds for their causes.

The event is also giving the couple the chance to renew their sporting rivalry.