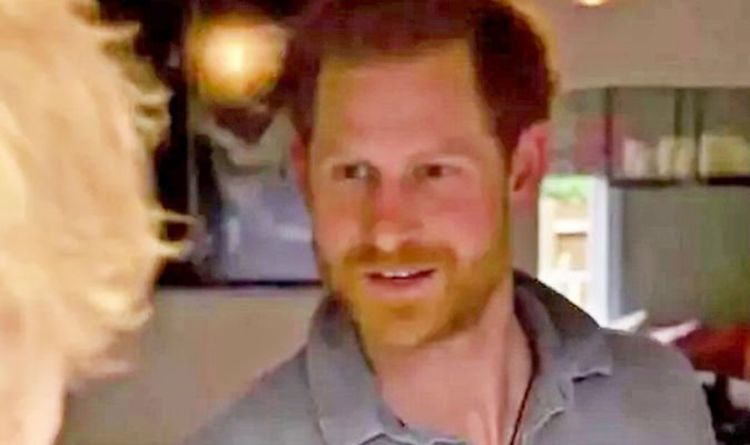 Prince Harry published on his official Instagram account, sussexroyal, a brief video where he can be seen opening his home’s door to find Ed Sheeran waiting on his doorstep. In the video, which lasts only a few seconds, the Duke of Sussex welcomes singer Ed Sheeran calling him “mate”.

The singer and the prince shake hands, with Ed asking “how are you doing”.

Prince Harry then, joking, says “it’s like looking in a mirror”.

The singer asks if he can bring the camera inside, and is invited to enter Harry’s home.

The video cuts off, and a black screen teases viewers they will be able to discover more about what the couple are up to tomorrow.

The brief video offers a chance to royal fans to take a brief look inside what looks like the home of Meghan Markle and Prince Harry.

And it reveals the Sussexes have a cheerful ring doorbell, which can be heard in the first few seconds of the video.

The collaboration between Ed Sheeran and Harry is likely to be related to World Mental Health Day, which is celebrated tomorrow.

Prince Harry has been working relentlessly in the past years to make it easier for people to start a conversation on mental illnesses and mental wellbeing.

And, in a tell-all interview, he opened up on his own struggles and the difficulties he faced following the death of his mother, Princess Diana.

On Monday, a short film aired on all the British commercial channels to advertise Every Mind Matters, a new NHS’ platform pointing people suffering from mental health issues towards the help they need.

Meghan and Harry, together with Kate, Duchess of Cambridge, and Prince William, lent their voices to narrate the video.

The launch of the platform was a success, and the website of Every Mind Matters was so visited shortly after the film aired that it crashed.

The video was immediately welcomed with enthusiasm by royal fans.

One said: “Oh brilliant two of my favourite gingers!

“And I mean that in a loving and endearing way. Can’t wait!”

Another said: “This is like a dream come true.”

And a third added: “Wow two of my favourite people”.

Other royal fans seemed excited not only for the collaboration between the royal and the singer but also for the chance to take a look inside Frogmore Cottage.