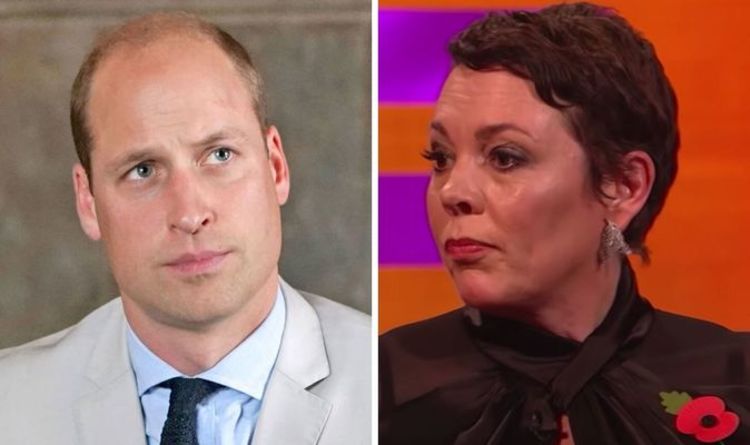 The Duke of Cambridge told the show’s star Olivia Coleman that he does not follow the storyline when they met at a recent dinner. The Oscar-winning actress revealed his surprise response when she appeared on the Graham Norton Show on Friday alongside her co-star Helena Bonham Carter, 53, who plays Princess Margaret in the drama. Olivia, 45, said: “I met Prince William at a diner and he asked what I was doing at the moment before he quickly added, ‘Actually, I know what you’re doing’.”

She continued: “I was so excited and asked, ‘Have you watched it?’

“His answer was a firm, ‘No.’ But he was very charming and very lovely.”

When asked how she prepared for the big role, Olivia admitted: “I did nothing, though I did have a movement coach but still I walked like me, or rather like a farmer!”

Olivia plays William’s grandmother in The Crown series 3, taking over from Claire Foy who portrayed Elizabeth II during her younger years.

Princess Anne chatted with the star after she was awarded her CBE for her services to drama.

Sitting next to her on the Graham Norton Show couch was Lady Anne Glenconner, the former lady-in-waiting to Princess Margaret.

The 87-year-old is the wife of the late Colin Tennnant, the 3rd Baron Glenconner.

She had guests in stitches of laughter which her account of her Paris honeymoon which is mentioned in her new book, her autobiography, ‘Lady in Waiting: Me Extraordinary Life in the Shadow of the Crown’.

She recalled how she had fallen asleep on the first night of her honeymoon, much to the dismay of her new husband.