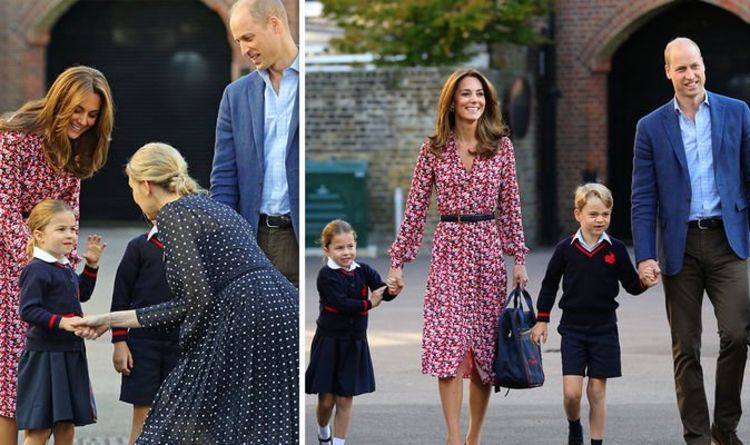 Princess Charlotte has officially become a pupil at the exclusive £18,915-a-year Thomas’s Battersea this morning. The confident little royal arrived on the school’s premises walking hand-in-hand with her mother Kate, Duchess of Cambridge, who was holding her backpack.

Prince William was also in attendance, and was holding the hand of his eldest son, Prince George, who starts today his second year.

The Duke of Cambridge drove to school his children in the family’s Land Rover Discovery, arriving at destination shortly after 8.15am.

In the sweet snaps, Princess Charlotte can be seen playing with her ponytail and smiling while proudly sporting her new school uniform.

The Cambridges were welcomed on the school’s premises by Helen Haslem, head of Thomas’s Battersea lower school – the same teacher who walked Prince George inside the building last year.

During her first interaction with Ms Haslem, Princess Charlotte looked relaxed and happy.

The only daughter of Kate and William gave Ms Haslem a firm handshake, before being led inside and meet all her new teachers and school friends.

Princess Charlotte, who celebrated her fourth birthday on May 2, is “hugely excited” to join Prince George at the school, where he has been “extremely happy” during the past year, according to sources who spoke to the MailOnline.

Kensington Palace celebrated the special day for Charlotte with a tweet, writing: “Princess Charlotte arrives for her first day of school at Thomas’s Battersea, joining her older brother Prince George.”

Today marked an emotional milestone for Kate just as much as Charlotte, as the Duchess could not experience the excitement of the first day of school of George last year because she was suffering from severe morning sicknesses during the first months of her last pregnancy.

For the special occasion, Kate wore a Michael Kors dress, which costs £150.50.

The Duchess of Cambridge accessorised with navy blue suede stilettos with a pointed toe and simple silver hoop earrings.

The exciting day will bring many changes into the life of Princess Charlotte – including being addressed as Charlotte Cambridge by her school friends and teachers.

Similarly, Prince George had to get used to being known in school as George Cambridge, a surname coming from his parents’ titles.

Prince George, who looked much shier than his sister on his first day of school last year, has already experienced the little fright that may come with this new adventure, and is believed to be ready to help Charlotte going through any difficulties she may encounter.

“I’m sure he’ll look after his little sister and take great pride in showing her the ropes.”

Princess Charlotte and Prince George aren’t the only members of the Royal Family attending the £6,000-a-term school.