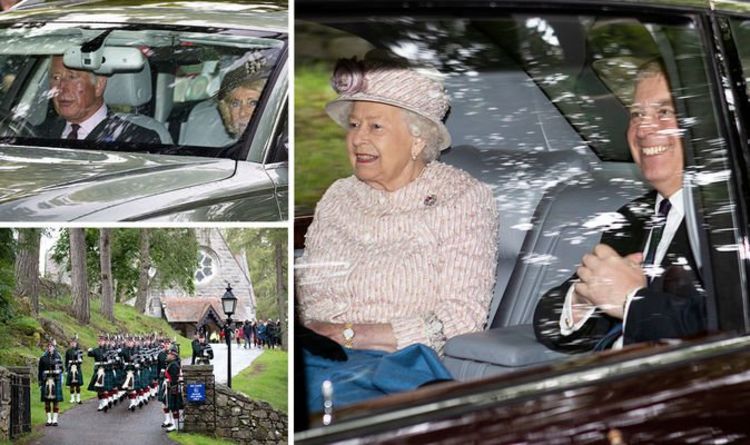 Queen Elizabeth II and her second eldest son smiled as they drove through the estate, two days after new claims about the Duke of York and billionaire friend Jeffrey Epstein emerged. Court papers alleged the Duke had touched a 21-year-old woman’s breast during a party. Epstein, accused of sex trafficking, was found dead in his police cell yesterday.

The Duke and Duchess of York arrived at Balmoral separately, with Sarah also staying in a separate lodge away from the rest of the Royal Family.

Their eldest daughter Princess Beatrice is also at the estate, and was seen in the same car as the Queen and her father this morning to attend church.

The 66-year-old financier was being held in Metropolitan Correctional Centre in New York after being charged with conspiracy and sex trafficking dozens of underage girls in the early 2000s.

Mr Epstein was being held without bail after a judge agreed with prosecutors that he posed a danger to the community and risked fleeing the country.

On Friday, documents relating to his case were unsealed, and included claims the Duke of York groped a woman’s breast during a visit to Mr Epstein’s apartment in 2001.

Johanna Sjoberg gave a sworn deposition that the Duke of York fondled her breast after she sat on his knee while the billionaire’s “sex slave” Virginia Giuffre sat alongside.

JUST IN: Sarah Ferguson shocks as she joins Prince Andrew in Balmoral

He has always denied any wrongdoing.

In a 2015 court application, a judge threw out Ms Giuffre’s allegations taht she had sex with the Duke and ordered them to be struck from the record as being “immaterial and impertinent”.

The prince came under fire in 2010, after he was pictured strolling through Central Park with Mr Epstein following his release from prison.

This led to the Duke stepping down from his role as Britain’s trade envoy in July 2011 and forcing Buckingham Palace to say all contact with Epstein had been cut.

Andrew’s former wife, Sarah Ferguson, was also dragged into the controversy in 2015 when it emerged she accepted £15,000 from Mr Epstein five years earlier to help clear her debts.

Both the Duke and Ms Ferguson, known as Fergie, choose to fly to Scotland yesterday to take refuge from the scandal.

The pair took different flights to Scotland and Fergie is understood to be staying in Craigowan, a shooting lodge on the estate, while Andrew was in Balmoral Castely with the rest of the royals.

One aide said: “They are both facing some grim times. Balmoral is a very quiet, very remote place where people can work things out in total calm.