The coronavirus pandemic has plunged the world into a state of crisis. In the middle of the lockdown, we lost two of our most loved actors. Irrfan Khan and Rishi Kapoor left this world for their heavenly abode. On May 30, it was one month to the death of Rishi Kapoor. Neetu Kapoor and Riddhima Kapoor Sahni shared priceless throwback pictures, which made fans very sentimental. The lady has shared a picture where we can see Rishi Kapoor with Ranbir Kapoor and Riddhima in his lap. Little Ranbir Kapoor looks absolutely adorable. Riddhima looks a bit distracted in the picture. She put it in her Insta stories a day back. Also Read – RIP Rishi Kapoor: A month after the veteran actor’s demise, Riddhima Kapoor Sahni remembers her father with an emotional post 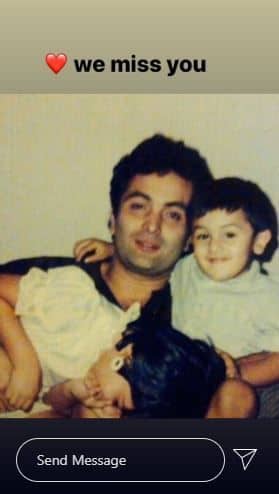 Riddhima Kapoor Sahni drove down from Delhi to Mumbai in her car to be present for the final rites. Sadly, they had to cremate his body on the same day as his death. She could not see him for the last time. The cremation had happened at Chandanwadi crematorium. She came for the Asthi Visarjan that took place at Walkeshwar’s Banganga Tank. Riddhima Kapoor Sahni is staying now with mom Neetu Kapoor while Ranbir Kapoor and Alia Bhatt are together in quarantine. Riddhima Kapoor Sahni has shared some of the best pics. Also Read – RIP Rishi Kapoor: Riddhima Kapoor Sahni shares another memory; says, ‘We are Family’

She posted a picture of Rishi Kapoor dancing with his mom, Krishna Raj Kapoor. She wrote that he was closest to his mother. She died in 2018 just after he left for treatment to the US. Yesterday, Neetu Kapoor also posted a picture with some beautiful lines. The poem read, ““Wish me luck as you wave me goodbye…Cheerio, here I go on my way…With a cheer, not a tear, in your eye…Give me a smile, I can keep for a while…In my heart while I’m away.”

After his death, the family told fans to respect all the rules of lockdown. They said he would not like it otherwise.