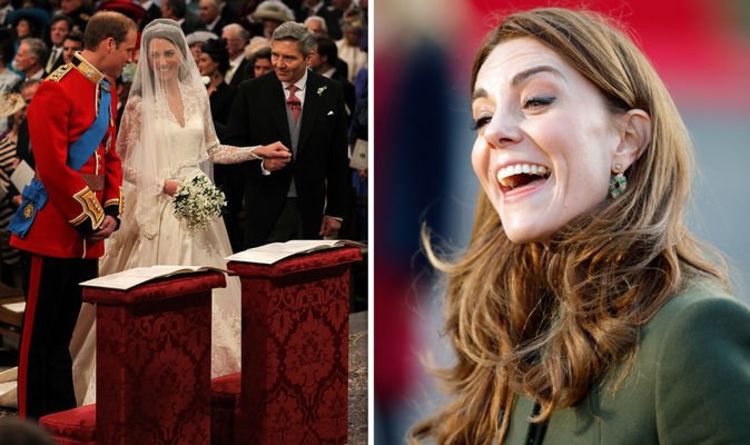 Ms Nicholl said: “When her father looked as though he might falter on their journey to the Abbey, Kate had begged, ‘Please, Daddy, don’t cry. It will set me off, too.’

“She had managed only a bite of toast that morning and had been up since six, but Kate did not once let her emotion get the better of her.

“Harry, who was standing at his brother’s side, could not resist a peek.

As Kate arrived with her father at the altar, billions of viewers around the globe could see Prince William say something inaudible to his bride.

Royal author Marcia Moody, in her 2013 book “Kate: A Biography”, reveals exactly what William said to Kate as she arrived to marry her prince.

Ms Moody writes: “The couple set eyes on each other, and William murmured to Kate, ‘you look beautiful.’”

His words echo those of his father Prince Charles, when he married Princess Diana at St Paul’s Cathedral in 1981.

A guest at the following Queen’s Reception, at Buckingham Palace, told the author: “Although it was formal because of the sheer number of royalty in the room, it was also very intimate.

“William led Kate into the room and introduced Kate as ‘my wife, Mrs. Wales,’ and everyone cheered.”

Ms Nicholl described the couple’s iconic Buckingham Palace balcony appearance, adding: “After waving to the crowd, they kissed, but if you blinked you missed it, so fleeting was it.