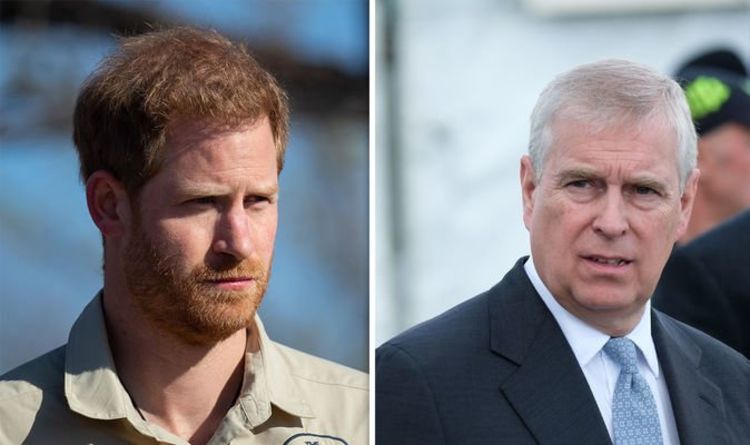 Harry is the younger brother of Prince William, who is second in line to the throne as Prince Charles’ eldest son. While William is often perceived as the more dutiful son, Harry is seen as the loveable rogue of the Royal Family. Unlike his brother who attended University of St Andrews, he did not go to university and instead fulfilled his lifelong dream by joining the Army and going on a couple of tours in Afghanistan before becoming a full-time royal. He settled down into married life only last year at 34 when he wed the American actress and divorcee Meghan Markle in May 2018.

They had their first child, Archie Harrison Mountbatten-Windsor five months ago and have decided to raise him as a ‘private citizen’ without an official royal title – in stark contrast to William’s children, who are known as Prince George, Princess Charlotte and Prince Louis.

In 2017 Radio 5 Live series ‘Images of Diana’, royal experts speculated over how Prince Andrew and Prince Harry are connected – both men have older brothers who will almost definitely inherit the throne one day.

Royal commentator Camilla Tominey said: “I think there is a sense that Prince Harry needs to find the right direction and role in life.

“You wouldn’t want to see Prince Harry cast in the role that the Duke of York has been, being totally overshadowed by his older brother in terms of his charitable commitment and seen as somebody who has all the trappings of royal life with perhaps not taking enough responsibility for what his role is.”

Andrew, the Duke of York, was second-in-line to the throne at the time of his birth.

Just like his nephew, he spent several years in the armed forces, but as a naval officer rather than an army captain.

He also dated a famous American actress, Kathleen ‘Koo’ Stark, but their relationship ended and he later married – and divorced – his childhood friend Sarah Ferguson.

Up until Andrew turned 40, it was believed he could become Prince Regent if both the Queen and Prince Charles were to die.

William would then have been crowned King once he reached his 18th birthday.

Now William has children of his own, Andrew has been pushed further down the line of succession and is known primarily for his complicated divorce from Ms Ferguson.

Mr Edwards said: “He should have thought about that before he said that, because you see the Queen has done this massive massive job for many years and the Prince of Wales raises £100million for charity per year.

“Look to their father, look to their grandmother – I don’t think they would have said that.

“I think he would have got a lot of stick over that and I think he deserved it.”

Ms Tominey, however, explained how difficult it is for Harry and William to establish their own roles in the Royal Family without stepping on other family members’ toes.

She said: “I think that William is acutely aware of his place in the pecking order. They have a difficult role to play in not overshadowing Prince Charles and Camilla too much.”