Royal snub: Why Edward was first prince since Tudor times to be given lesser title 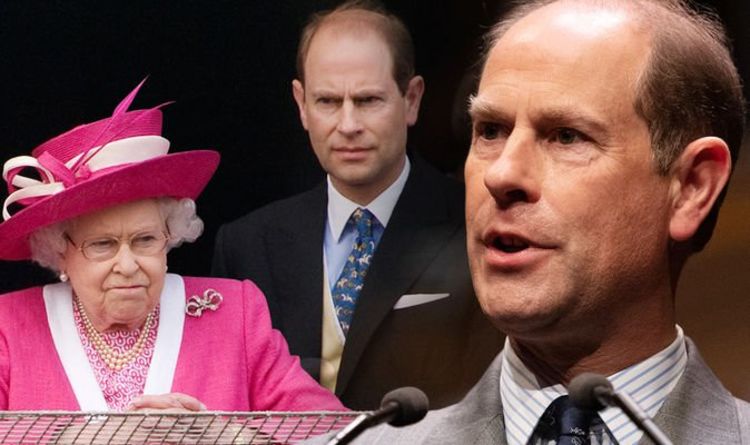 Edward is known as the Earl of Wessex, unlike his brothers Charles and Andrew, who have royal duke titles – the Duke of Cornwall and Duke of York respectively. Edward’s wife Sophie is known as the Countess of Wessex and their children are styled as children of an Earl rather than as HRH prince or princess. Their two children are known in court communications as Lady Louise Windsor and James, Viscount Severn, one of Edward’s subsidiary titles.

According to Debrett’s, this is the first time the child of a monarch has been given the title of Earl instead of Duke on marriage and Royal Central confirmed it had been centuries since this last happened.

Edward, 55, may be the Queen’s youngest child but it was actually his decision that made this happen.

However, he asked the Queen for an alternative, named after a character in his favourite film Shakespeare in Love – Lord Wessex.

An insider told The Telegraph in 2010: “He liked the sound of it and asked the Queen if he could have that instead.”

The Queen agreed and gave him the title Earl of Wessex – he could not be a Duke because there is no such dukedom or even a region known as Wessex in the modern UK.

In fact, Wessex was one of the kingdoms of Anglo-Saxon England before the country unified in the 10th century.

However, there is also another reason for this snub of the duke title – and it is related to Prince Philip.

Technically, the title would go back to the crown when Philip dies, and would then go to the next-in-line – in this case, Charles – but the monarch could reissue the title to Edward.

It is thought that the Queen may do this when her husband passes away or that Charles will do it after both his parents have died and he succeeded Queen Elizabeth II to the throne.

However, this decision has meant that Louise and James are the Queen’s first male-line descendents not to have royal titles.

In accordance with Her Majesty’s 1960 Order-in-Council, they are the first to be allowed the proper use of the Mountbatten-Windsor family name.

This might also be related to Prince Charles’ idea that the Royal Family should have a smaller number of members to perform royal duties and be supported by taxpayer money.

While it was decided when they married in 1999 that any children of Edward and Sophie would be styled as children of an Earl, both Louise and James would ordinarily have been entitled to HRH status.

In Letters Patent issued in 1917 by King George V, the King accorded the Princely title to all children of the Sovereign, the Sovereign’s male-line grandchildren and to the eldest living of the Prince of Wales’s eldest son.