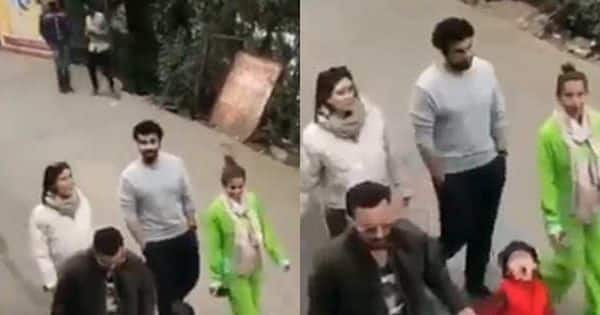 A new video of cute, little munchkin Taimur Ali Khan is going viral across social media platforms as we speak. The adorable kid was recently strolling with dad Saif Ali Khan and mommy Kareena Kapoor. Lovebirds Malaika Arora and Arjun Kapoor had also accompanied them. But it seems that Taimur was in no mood of getting clicked. Having probably spotted some paparazzi in the vicinity, Taimur is seen looking above and yelling at someone, “No photo,” and the cuteness of it all cannot be lost even on the hardest of hearts. Watch the video below: Also Read – Kareena Kapoor opens up on celebrating Diwali with Saif Ali Khan in Dharamshala: We plan to keep it very quiet this year

Opening on her Diwali plans to Bombay Times, Kareena Kapoor Khan had earlier said, “It’s been a year where we had to be at home for a long duration. So, going to Dharamshala and being there for a few days will be great. We plan to keep it very quiet and spend as much time in the open as we can. It’s obviously not going to be a big Diwali, and I am very happy with that, I would rather have it small this year.” Also Read – Has Saif Ali Khan tripled his remuneration for his upcoming projects?

Kareena Kapoor, Malaika Arora, Saif Ali Khan, Arjun Kapoor, Jacqueline Fernandez and Taimur Ali Khan are presently celebrating Diwali together in Dharamshala, Himachal Pradesh. The five are certainly having a jolly good time brining in the festival of lights at the serene hill station. Saif, Jacqueline and Arjun were already at Dharamshala shooting for their upcoming horror-comedy, Bhoot Police, and Malaika and Kareena decided to join them with the little fellow, Taimir Ali Khan, in tow. Well, even without posing for a photo-op, Taimur still grabs our attantion with such candid moments. Also Read – Bhoot Police first look: The new poster of the Saif Ali Khan-Jacqueline Fernandez-Yami Gautam-Arjun Kapoor gives a Scooby Doo vibe