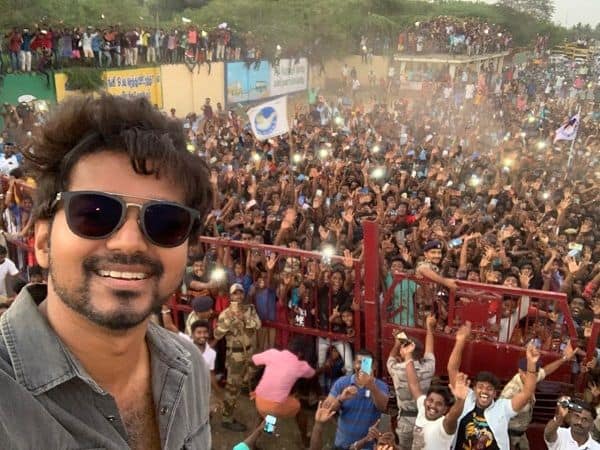 Well, it’s needless to say that Kollywood megastar Thalapathy Vijay enjoys one of the craziest fandom not only in his territory but also on social media. In February during the shooting of Master, the actor saw a huge crowd of fans in Neyveli waiting to see his glimpse and this moment was overwhelmed to see the support. The Mersal star climbed over the top of a van and clicked a selfie, which has created a record today. With more than 135 K retweets, it became the most retweeted photo of an Indian actor. Well, that clearly shows the superstardom of the Bigil actor. Also Read – Thalapathy Vijay’s Neyveli selfie becomes Twitter’s most retweeted photo of an Indian actor

Meanwhile, Thalapathy Vijay is gearing up for the release of Master, which also features Vijay Sethupathi, Malavika Mohanan, Arjun Das and Shantanu Bhagyaraj in pivotal roles. It is is bankrolled under the banners of XB Film Creators and Seven Screen Productions. In the recently held audio launch, the actor praised his costar, Vijay Sethupathi, and said, “Vijay Sethupathi has now become a person who cannot be avoided. We have seen many negative characters, but his role in Master will be special. I asked him why he agreed to do the film and he shut me down by saying four words — I really like you.” Also Read – Master and Kaithi director Lokesh Kanagaraj announces his next project with Kamal Haasan titled Aandavarukku Nandri

Appreciating his director, Thalapathy Vijay said, “With Maanagaram, Lokesh made us notice his talent. His next film Kaithi made us watch it again and again. Lokesh has a special talent. Being a banker, he has managed to do a film like Maanagaram, which has a complex script. He won’t even have a scene break-up paper in his hand on the set of Master and I was confused seeing this. I wondered how to work with him for the next few months. Later, I realised, Lokesh is not just a planner, but a master-planner.” The actor concluded the speech with a punch-line to his haters, “Kill them with your success, bury them with your smile. Sometimes, if we have to stay true, we have to be silent.” Also Read – From Nanban to Shankar Dada MBBS: 5 South films inspired from Bollywood blockbusters