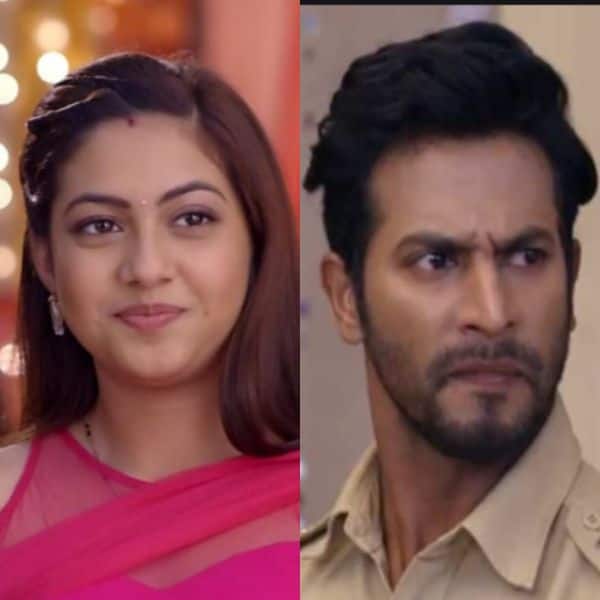 In the last episode we saw that Kalyani meets Malhar as he comes back house. But he asks Kalyani to keep quiet about him being there. But Mamta is present right there who notices him. Malhar also sees her. But before Malhar reveals Mamta’s reality to Kalyani, Ahir hits Malhar with a rod. He ties Malhar threatens to hang him till death if Kalyani doesn’t marry Rachit. Meanwhile Sarthak’s daughter Ridhhi also arrives at Ahilya Niwas. But Sarthak tells Asavari that she is his friend’s daughter so that Ridhhi will not be danger. But Ahir makes Ridhhi also hostage. Sarthak learns that Asavari is with Ahir now. Ahir makes Kalyani get ready for the wedding. Kalyani keeps trying to make every ritual fail but Malhar somehow manages to force Rachit put mangalsutra and sindoor to Kalyani.

Episode starts with Kalyani thinks I stopped all the rasams, how to stop this rasam and asks Bappa to give her idea. Aahir asks Ranchit to make Kalyani wear Mangalsutra quickly. Ritvi gives glass piece to Atharva and he hides in pocket. Aahir says to Raghu we have to hang Malhar after marriage. Atharva dances saying today is my Aayi wedding. Everyone watches Atharva and in this mean time Kalyani wears Mangalsutra taking from Ranchit hands. Aahir asks Atharva to dance more. Aswari says it’s getting late for pheras. Aahir asks to start the pheras. Aswari ties Gadhbandan and asks Aahir are you really gonna release Malhar after marriage. Aahir says no because now he knows our secret. Kalyani tries to remove Gadhbandan while taking pheras. Atharva places glass piece in family hand to untie their hands and says I will release you all. Anupriya and others unties their hands using the glass piece. Mamtha tries to indicate this to Aahir.

Aahir holds Atharva and asks what are you saying to family. Atharva says I’m getting toilet and that’s what I’m saying. Aahir says noone can leave from here. Kalyani (Reem Shaikh) hurts her feet while taking pheras to stop the pheras. Aswari says you can’t take pheras but groom can apply sindoor. Ranchit takes Sindoor from Pandit. Mamtha unties her hands and says your game is over Aahir and reveals how Atharva gave them glass piece so now they can stop the marriage. Everyone gets stunned with her revealation. Aahir asks Naxals to tie everyone again and he beats Atharva. Ritvi tries to stop him saying it’s my idea but he throws her. Kalyani asks him to stop because she is doing according to his wishes. Aahir asks than why are you not completing Sindoor rasam. Kalyani says I will do it but someone from my family must stay with Malhar so they can release him after my marriage. Aahir asks to release Kalyani mom. Mamtha stands beside Malhar and asks him to see Kalyani properly before he die. Aswari asks Ranchit to apply sindoor, Kalyani says you have to apply and tricks it so it raises from Ranchit hand and fells on Kalyani Maang without his involvement.

Kalyani asks them to leave Malhar, now sindoor is in her maang. Aahir says now Malhar will be hanged. Kalyani says how can you do this and it’s my mistake to trust you, when she about move Aahir holds her, Kalyani bites him, gun fell down from his hand, Sarthak hides gun behind them. One of Naxal tries to pull the machine handle if hanger but he can’t. Ritvi pours mirchi powder in Naxal eye. Mamta gets impatient and throws Naxal member and pulls the machine handle to hang him. Kalyani and others gets shocked. Kalyani beats Naxals and holds Malhar before he gets hanged. Stay tuned for more scoops and updates.