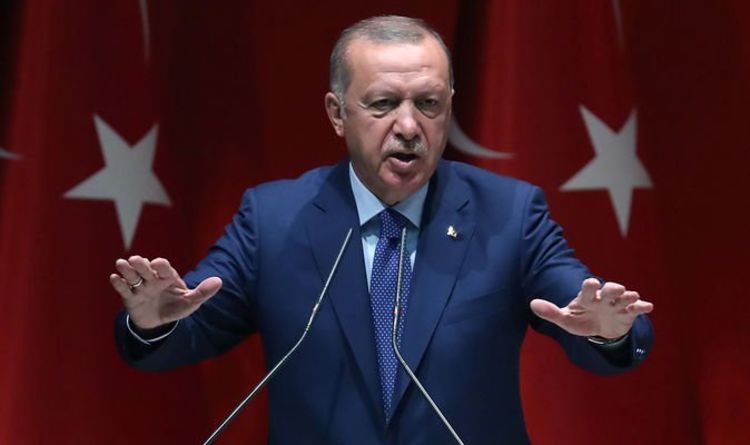 The reduction to 16.5 percent represents Turkey’s second aggressive cut in less than two months as it seeks to add much-needed momentum to a recession-hit economy. The bank, headed by recently-appointed Governor Murat Uysal, cited a recent fall in inflation and a global shift to easier monetary policy for the lowered benchmark one-week repo rate from 19.75 percent. Mr Uysal took over at the central bank two months ago after his predecessor was sacked by Turkish President Recep Tayyip Erdogan after they disagreed about the pace and depth of interest rate cuts.

The bank said in a statement: “At this point the current monetary policy stance, to a large part, is considered to be consistent with the projected disinflation path.”

It added the “inflation outlook continued to improve” and last month “displayed a significant fall”.

He wrote in a financial note: “We read this statement as a signal that next moves in the policy rate are more likely to be measured compared to the last two big cuts.”

But following the latest cut to interest rates, the Turkish lira rallied more then one percent against the US dollar.

This was bigger than economists predicted, but smaller than markets were pricing.

The uplift in the country’s prospects have been magnified after finance minister Berat Albayrak said he believes the economy will grow on an annual basis in 2019.

Turkey’s economy slumped a less-than-expected 1.5 percent in the second quarter of this year – a third consecutive quarter of year-on-year contraction.

Before last year, Turkey’s economy had grown consistently by five percent on an annual basis but the Turkish lira crashed by more than 30 percent in 2018, sending inflation and interest rates soaring.

But despite the country’s recent economic troubles, the Turkish Government believes the distance to a recession will grow, forecasting annual growth at 2.3 percent in 2019 and 3.5 percent in 2020.

Speaking at a European Bank for Reconstruction and Development (EBRD) event in Istanbul, Mr Albayrak attempted to paint a bright future for Turkey’s economy.

He said Government economic rebalancing was close to the desired level, and that inflation would fall to single digits.

The finance minister told an audience: “September indexes clearly show that we will post single digits in both consumer prices and producer prices.”

Mr Erdogan has been battling to arrest an alarming slump in Turkey’s economy, sparked by an ongoing and bitter global trade war with the US.

President Donald Trump has punished the country by imposing billions of dollars of tariffs on a range of products.

The Turkish leader, who has previously described himself as “allergic” to high interest rates, has continued to insist he wants the rate to come down to single digits as soon as possible.

He is eager for the country’s economy to return to previous strong growth after last year it tumbled into its first recession in more than a decade.

The Turkish economy appears to be heading in the right direction, with inflation falling in recent months, reaching 15 percent in August.